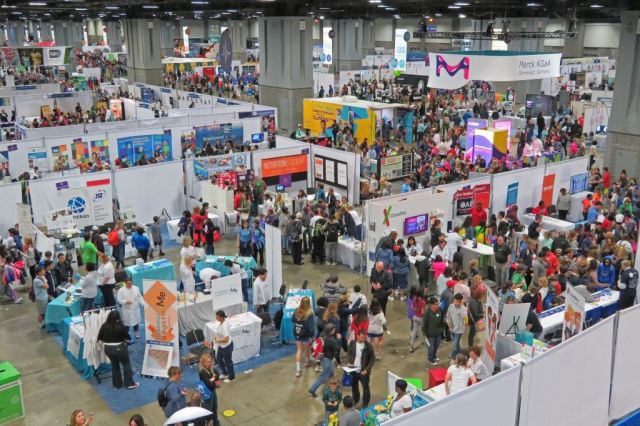 The 5th Annual USA Science and Engineering Festival took place on April 7th and 8th in Washington, D.C. This event welcomes scientists and non-scientists alike to showcase their science and learn more about what scientist do. Over 350,000 attendees could view 20 different stage shows that featured scientists, entertainers who use science (think explosions and lasers), and even a stunt scientist. Also at the festival, 18 pavilions where attendees could participate in 3,000 different hands-on activities. NSF participated in the pavilions where program officers and investigators shared with attendees what they do.

At NSF’s pavilion, Dr. Erick Greene of The University of Montana was there with his students and his ‘roboraptors’. Dr. Greene’s research focuses on how animals communicate; in this case how small birds, black-capped chickadees, communicate information on predator threat to each other. Chickadees do this through alarm calls that contain information on the size and level of threat the identified predator poses.

To study how chickadees, respond to predators, there must be predators around. In this case, Dr. Greene used robotic models of great-horned and pygmy owls to simulate the presence of predators. Model predators are more reliable and allow for the standardized assessment of a response. As the research places the predators in the experiment area, they know exactly what predators will be around and when. These model owls move just like a real owl might and elicit a behavioral response from chickadees who don’t want them around – the chickadees accept that this is a real threat that they must respond to.

It turns out that the roboraptors also attract human attention, says Dr. Greene. “Many people stopped in their tracks when our very realistic roboraptors looked around at them.” Those who stopped to find out more got to record their voices and see what their voice ‘looked’ like via a spectrogram – a visual representation of sound that Dr. Greene uses to assess changes in chickadee calls – and what made their voice unique. Attendees could use different musical instruments that were analogs for the different ways that animals make sounds and learn how animals make these sounds.

Attendees also learned how the alarm calls that chickadees make relay information on what sort of predator they are reacting to. “At the end I played a series of chickadee alarm calls, and everyone was able to tell which predators had elicited all the calls!” says Dr. Greene. Quite a surprise to find out that such detailed information can be contained in a simple bird call that you might hear every day!

Dr. Greene’s roboraptors help researchers answer important questions about the way animals – including humans – process and communicate information. Understanding how an animal with limited intelligence, such as a chickadee, can “speak” to other animals and have it been understood can teach us about the development of human languages and how information moves within human populations. We can also learn a lot about human learning by studying the ways in which other species decipher chickadee calls to learn which predators are around and react appropriately.

But there’s a conservation aspect to this as well. As environments become noisier with human activities, this could disrupt communication between individuals, making it easier for predators to hunt them. If members of a threatened or endangered species couldn’t communicate with each other, that species might decline further or even be lost. If there’s a major change in the community – say, if a new predator species arrives or if we lose an endangered species – we need to know whether or not birds can add that change into their calls and if other species can learn to interpret the new calls quickly enough for the change not to disrupt the community.

Thanks to Dr. Greene, his students, and – of course – the roboraptors, attendees of this year’s festival got a rare glimpse into the language of the forest and learned a bit more about all the important things a chickadee can teach us. Dates for the 2019 USA Science and Engineering Festival are not confirmed yet, but this festival typically occurs in April. To stay up to date on the festival’s upcoming activities, visit them on Facebook, Twitter, YouTube, or Instagram.