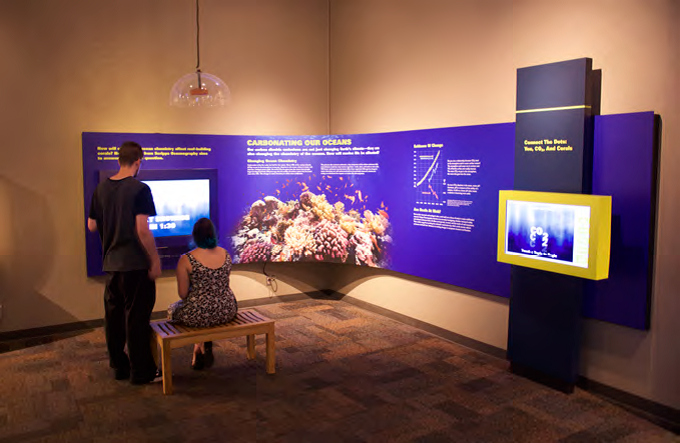 Dr. Martin Tresguerres of the Scripps Institution of Oceanography, UC San Diego, has developed a distinctive broader impacts plan. In collaboration with the Birch Aquarium of Scripps (BAS), he has created a detailed public museum exhibit to educate the general public about coral cell biology and ocean acidification. His exhibit contains several panels with interactive materials such as videos and touch screens, as well as a public lecture that is also available online through UCSD-TV and YouTube.

Dr. Tresguerres came up with his idea when he recognized that his research topic, coral cell biology, might be a complex topic to explain to non-scientists. However, he still wanted to make sure that he was able to share his findings and their importance to the general public in an efficient and effective way. He decided that the best way to do this, especially for younger students, would be to use visually attractive materials such as computer animations, videos, and an interactive touch screen. He reached out to Debbie Zmarzly and her specialized staff at BAS to put together the exhibit, and together they contacted Dr. Graham Johnson’s group at UCSF to provide the computer animations.

Since BAS receives over 500,000 visitors per year, Dr. Tresguerres’ NSF-sponsored exhibit reaches a very diverse audience. From February to June 2016 alone, the exhibit was seen by over 170,000 people including 1,687 college students and 18,185 K-12 students. He is also able to reach all types of people with his online materials, which have had about 500,000 views since 2012. BAS keeps track daily of the public visitors which allows Dr. Tresguerres to measure the impact of his activity. He states that the feedback so far has been “excellent” and is excited that BAS is planning to do a more detailed survey starting later this year about his exhibit specifically, including questions on clarity of the exhibit, the level of interest of the survey participant, and what the participant learned.

Dr. Tresguerres would advise PIs that are trying to strengthen their broader impacts to be creative and unafraid to try to broadcast their own research to the general public, even if it seems like a daunting task at first. He would also suggest teaming up with people specialized in bringing complicated research topics to a level understandable by the general public, and to use technology and visual aids to help reach younger audiences.